COMMUNIQUE ISSUED BY YORUBA ONE VOICE( YOV) AT THE END OF YOV QUARTERLY CONFERENCE HELD ON SUNDAY JUNE 5,2022,VIA ZOOM

Yoruba One Voice (YOV) is a global organization made of Yoruba opinion and community leaders, intelligentsia, professionals, business entrepreneurs, working class and students of tertiary institutions resident in Nigeria and the Diaspora.

Among several reasons,Yoruba One Voice is established to promote core Yoruba values, unity and collaborative efforts towards a prosperous and technologically advanced society in Yoruba Land; promote and disseminate Yoruba cultural values in an innovative manner through effective engagement of our professionals, academicians and intellectuals at home and in the Diaspora in skills development and knowledge acquisition and transfer; and also harness indigenous knowledge of Yoruba people at home for the social and cultural development of Yoruba global outreach.

Yoruba One Voice is also created to create a synergy between Yoruba traditional knowledge, educational and research institutions for the development of local resources like medicine and food for the livelihood of the Yoruba people; provide the platform for the sharing of ideas between Yoruba professionals in diaspora and Yoruba professionals at home towards a basket fund for the development of research in science, culture, music, art, and agriculture; and create an international network of talented young Yoruba men and women in various fields of human endeavours that include but not limited to music, art, creative industry (Computer Innovation), media, sports and economic entrepreneur for effective exploration of global opportunities for the overall philosophy of Yoruba youth industry and capacity building.

The purpose of establishing Yoruba One Voice is to realize a Yoruba Nation where all forms of racial discrimination, threats, dangers, and risks to the lives, livelihood, properties, well-being and safety of all citizens, residents and visitors are eliminated.

Yoruba One Voice is also established to ensure that all citizens, residents and visitors are consistently treated fairly, equally, justly and humanely in accordance with Human Rights as contained in all international charters.

Yoruba One Voice rejects and seeks to eliminate all forms of slavery and servitude imposed on Yoruba people by the British via a forced amalgamation of culturally noncontiguous and incompatible people, cultures and values.

Yoruba One Voice is also created to establish to claim and take charge of all our ancestral lands westward of River Kwara,and Kogi States

The visual conference had participants that included the Convener and the Aare Ona Kakanfo of Yoruba land, Iba Gani Abiodun Ige Adams, opinion and community leaders, intelligentsia, professionals, business entrepreneurs, working class scholars, students, the media, and other stakeholders from within and outside the Nigeria.

Two (2) papers were presented at the conference:

The first paper presented by Ogbeni Olumide Okunmakinde, a lawyer and cultural activist, themed “Working Towards an Independent Yoruba Nation”.

The second paper titled “Multifaceted Failure of Nigeria and the Sacrosanct for a Secured Need for a Secured Yoruba Nation” was presented by Ogbeni Olanrewaju Hassan Arowojede.

The presentations were followed by interrogative questions, thought- provoking discussions,observations interventions and suggestions.

The participants at the conference made some observations and recommendations.

Therefore after hours of meeting via zoom and deliberation by the Highest decision-making organ of Yoruba One Voice(YOV),the apex Yoruba diaspora coalition of all groups unanimously agreed on pertinent national issues

YOV’s position is also contained in the Communique:

(1) YOV’s Position on SELF DETERMINATION stands

YOV observed that Nigeria is
indeed a true example of a failed state, where current administrative arrangement does not guarantee safety of human lives and property.

Within the current contraption,there is pervasive marginalization and exclusion of Yoruba people within the composition of Nigeria.

The history of Yoruba exclusion took its root and had its foundation from the flag independence Nigeria got from the British and continued by their post- independence successors.

From its failed background,YOV maintained its position on self determination from the Nigerian nation.

That YOV unanimously condemn in totality the gruesome murder of over 70 people ( worshippers of St.Francis Catholic Church Owo) in Owo,Ondo state,on Sunday June 5.

The massacre was premeditated. It was also a calculated effort by the killers to wage war against the SouthWest.YOV will do everything that is possible to seek the safety of all Yoruba sons and daughters both home and in the diaspora.

The Yoruba group will defend the interest of our race,and ensure that all issues relating to discrimination, threats, dangers, and risks to the lives and property as well as the overall safety of the Yoruba are taken care of.

YOV also restated its position as a global organization that is made up of Yoruba sons and daughters in the diaspora.Members were drawn from different disciplines,including professionals,intelligentsia, business moguls,opinion and community leaders, working class as well as students of tertiary institutions resident in Nigeria and the Diaspora.

(4)YOV’s position on the promotion of Yoruba core values

That YOV agreed to continually promote all Yoruba core values including unity,peace and ethos of Omoluabi that will strengthen the progress of Yoruba race across Yorubaland.The Yoruba diaspora organization unanimously agreed to create an enabling environment for proper intellectual engagement, knowledge and skills acquisition, making concerted effort towards building capacity for the realization of an independent Yoruba nation

(5)YOV’s position on the ongoing referendum and the need to discon tinue the legal proceedings.

YOV also urged all Yoruba groups, especially, those involved in the ongoing legal proceedings on referendum to discontinue the legal process,which calls to question the legality of a referendum within the unjust Nigerian judicial system.

(6) YOV’s decision on security, equal rights,fair play and justice for all Yoruba

YOV unanimously reject all forms of slavery and servitude imposed on Yoruba people by the British via a forced amalgamation of culturally noncontiguous and incompatible people, cultures and values.

The Yoruba group also established its firm decision to ensure that all citizens, residents and visitors are consistently treated fairly, equally, justly and humanely in accordance with Human Rights as contained in all international charters.

(7)YOV’s position on regionalism, and call for renegotiation on the existence of Nigerian nation

YOV also affirmed its position on regionalism as panacea to solve the multi-faceted problems in Nigeria.The Yoruba diaspora group also stated that Nigeria cannot make a headway, untill there is a complete renegotiation of Nigeria’s existence.

Yoruba One Voice restated its position to claim and take charge of all our ancestral lands westward of River Kwara and Kogi.

This new demand is to strengthen the bond of unity across Yoruba land.

YOV unanimously seek the best way out of the current debacle for Yoruba people is to seek its independence from the oppressive Nigerian system.There should be unity of purpose and understanding among organizations and all individuals involved in the struggle for independent Yoruba nation.

The emergent new Yoruba nation should be anchored on philosophy ideology, true democracy, equity and justice.

The people particularly, the elites should set aside their diverse political leanings for the purpose of realizing one Yoruba nation.

The lectures provided insights into the various problems of Nigeria and also sought better solutions to the multi-faceted problems.YOV will use recommendations of the papers in the future engagements 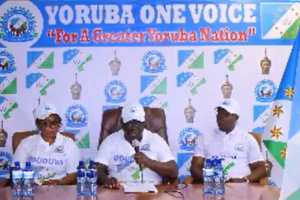